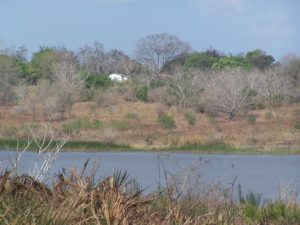 View from the Chem Chem looking across the lake to Kindwitwi church and guest house.

Kindwitwi’s surrounding landscape appears to be pretty unremarkable at first glance; the flat land is prone to flooding in the wet season from the Rufiji river, making the surrounding flood plains very fertile.

But on closer inspection, there is a little interesting geological phenomenon near to Kindwitwi.

Situated just outside the nearby Utete village is a hot spring, which feeds into the lake next to Kindwitwi. As the area isn’t volcanic, the water has come from deep in the earth and is heated as it comes into contact with hot rocks.

This spring is known locally as the ‘Chem Chem’ – Kuchemsha’ is the Swahili word for ‘to boil’.  Abdallah, our Care Centre Manager says he was told when he was younger that women who drink water from the spring when pregnant will have children who will have red teeth!

In the 1950’s water was pumped from the spring to the town of Utete and to the Kindwitiwi ‘camp’.

We are not sure when or why the pump stopped being used, but the ruins of the house where the pump man lived are still standing just above the hot springs.

Father Lamburn used to pay someone to walk across the shallow lake and bring water for his own personal use. ‘We do not have to boil our water, God boils it for us’ was favourite quote of his.

Today it is not possible to walk across the lake to the springs as the floods of 2005 brought crocodiles into the lake.

However, people from the village and from Utete still make a trip around the lake to visit the hot springs to wash clothes and occasionally to bathe, if a cool enough spot can be found!