Leprosy is caused by the bacterium Mycobacterium leprae, which is related to the agent responsible for TB. Leprosy is a WHO recognised neglected topical disease and has a low profile and status in Public Health priorities. Nevertheless new cases of leprosy are detected each year and it is vital that the disease is detected and treated in the early stages to prevent those affected going on to develop disabilities The disease is not easily caught or transmitted and is fully treatable with modern drugs, however leprosy still exists today. Why? 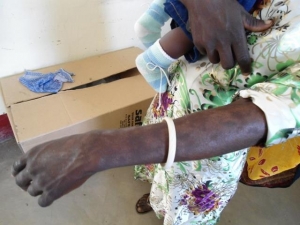 The first signs of leprosy, where small numb patches appear on the skin, is easily missed. It takes skill and experience to spot the signs. Confirmation in the lab is often not practical given the prolonged period of incubation, which can be up to ten years.

Length of treatment and complications

Once diagnosis has been confirmed, patients need to take the drugs regularly for at least six months. In rural Africa it can be hard to keep the drugs safe from deterioration or to remember to take them regularly in rural Africa. The drugs can also cause side affects, leading to people not finishing the course.

Initially the numb patches are not a problem so people who have been infected with leprosy continue to work. However because they have no feeling, people can suffer burns, stand on sharp objects and often get other injuries from continuing to farm and going about their daily activities. These injuries can become infected leading eventually to loss of the limb. Leprosy can also damage internal organs and eyelids. Even if a person has a successful course of treatment, occasional relapses may occur.

Help those affected by leprosy by taking our

Your hands and feet can make a difference