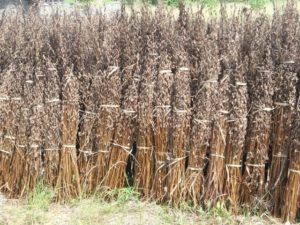 We’ve just had an update from Salum our shoemaker who has informed us it’s harvest time in Kindwitwi.

“It has been much better year and our farmers feel lucky,” he says. “So now we are busy gathering rice, which is our staple food, but the most promising crop this time is Sim Sim (sesame).”

Other crops grown in the area include pumpkin, tomato and green vegetables. Salum says sim sim is not attractive to wild animals and they do not have to guard it as they have to do with other crops.

“Also, it is the best cash crop in our area!” he adds.

As well as being used for food, sesame is used in cosmetics and pharmaceuticals so there is a high demand for this crop both locally and internationally.

Sesame is the perfect crop for farmers in Tanzania as, unlike maize and other traditional crops grown in the area, it is drought tolerant.

Kindwitwi has the added bonus that it is next to the Rufiji river, so the villagers’ fields (or shambas) have a top of fertile soil after the annual flood.