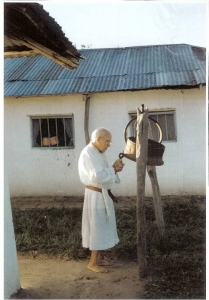 Kindwitwi came into being in the 1950s when the government of Tanzania sent people living with leprosy to be quarantined. This settlement, known then as a leprosy colony, was a place of indescribable poverty and despair. It was shunned by many in the local area. At this time even getting water from the crocodile infested river, a 15 minute walk away, was a life-threatening necessity.

In the 1960s Father Robin Lamburn was due to retire from missionary work with the Universities Mission to Central Africa but, being no ordinary priest, instead of coming ‘home’ to the UK, Father Robin chose to settle in the remote Rufiji Delta. But ‘retire’ and ‘settle’ does not describe the task he undertook and the wonderful work he was to initiate. He went to live in Kindwitwi, the leprosy colony, and lived with people affected by leprosy.

His vision was to give these people back their self-respect by showing them that they were not completely forgotten, that leprosy could be cured and that they could learn to develop themselves. Many of the people who live in Kindwitwi are descendants of the first people sent to live there.

‘Less than five feet tall; never drove a car; wore shorts and usually no shoes; lived in a remote village the wrong side of a wide river, usually crossed by a dugout canoe after a hard, long drive; housed in a mud hut with a corrugated iron roof but no electricity or available water and with only a bucket shower.’

There are many fascinating stories about Father Lamburn, including how he was very modern with challenging ideas, fun and how he was transformational to the area. He changed the lives of so many for the better. You can hear recording of Father Robin early on in his career at Kindwitwi on our dedicated page.

In the 1980’s, the staff and students at the International School of Tanganyika (IST) in Dar es Salaam, built a new dispensary, named the Ernest Polack Dispensary, the first principle of IST’s Upper School. This reflects the long relationship with IST thanks to the support of Mike Maybury, IST’s Headmaster. The dispensary includes a doctor’s office, examination and dressing rooms, a large laboratory and a secure drug-storage room. All of this came to fruition in 1986 and it still stands as a fitting memorial to the effort involved. Logistical problems hampered the construction of the building, as cement was very difficult to source with many stories of IST teachers and students helping to construct the building. Our relationship with IST is still very strong to this day.

The next phase in the development of Kindwitwi is probably best told in the words of Burchard, when he made a speech to donors in London in 2003.

‘In 1982, 124 people lived in Kindwitwi and all were receiving free food rations. In the 22 years since, the Village has grown to 441 people – and now nobody receives any free food, everyone is self-reliant, except for the 28 elderly, disabled patients who have no children to look after them. They do receive free support, full care, three cooked meals a day, comfortable housing and free clothing. They are living happy lives through your support.

‘The rest of the ex-leprosy sufferers have been rehabilitated. They have received free ploughing services and seeds from RLT and are now able to produce their own food. RLT has also been able to help in another way, this time with the building of new houses. So far, twenty-three families have decent houses. The houses are not decent in the English sense (maybe that’s not possible in Tanzania!), but houses which do have cement floors, corrugated iron roofs, walls made of stones and hard wood, with plaster inside which is then white-washed. These have been mainly for ex-leprosy patients and have been built under a self-help scheme. The German Leprosy Relief Association, with help from RLT, provided the money to buy the materials: the cement, the corrugated iron, the white-wash. The beneficiaries themselves undertook the building – indeed we could call this ‘ aid cooperation’. So what I can say the transformation of ex-leprosy patients into self-reliant individuals is 99% successful because of your support. 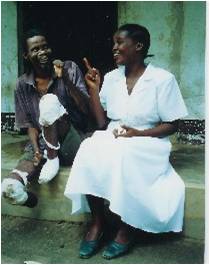 ‘The other work is the Outreach work. When Father Robin Lamburn took over in 1965 from the District Council, it was because the Council lacked the money to look after all the leprosy sufferers in the area. He based his work at Kindwitwi, so that patients were sent to Kindwitwi from other villages. Later, when RLT support started, a new approach to the Outreach work was favoured. A team went looking for new cases and began to treat them in their own homes instead of separating them from their families. This enabled the community to realise that the disease of leprosy is curable. The work continues to this day. For instance, in the past six years, we’ve been able to identify 722 leprosy cases and all but 58 (who are still receiving treatment) have been cured.

‘However, during 2002, 300 new cases were detected in 40 days of vigorous Outreach activity, the Leprosy Education Campaign. Our team travelled through the 98 registered villages (plus others not registered) in the Rufiji District. I have to tell you: Rufiji must be the worst place to travel in the world. There are no roads in many parts so that the POD (Prevention of Disability) team have to go by canoe in some places, and face dangers from crocodiles and hippos. They are at risk but the work must be done.‘

‘This has helped people not to fear the disease. In the past, leprosy sufferers were expelled from their families because contracting leprosy was seen as punishment by God for doing something bad to their family or neighbours – or that the individual had been bewitched. Nowadays it is considered as a disease just like any other. All this has been achieved through the campaign run with the help of RLT. 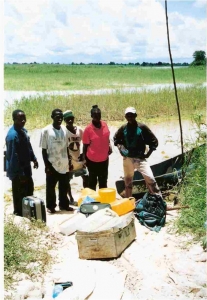 ‘Finding those extra 300 cases from the 400,000 people who live in the Rufiji District means that in total there are 14 leprosy cases per 10,000 people. Remembering that the WHO only considers leprosy to have been eliminated if that number falls to 1 new case per 10,000, there is still a long way for Rufiji to go! Providing education to primary school children is also crucial, but I have to tell you truthfully that even in this area, without RLT support, nothing would happen.

‘The Government of Tanzania is supposed to do this work, but Leprosy Control is in the hands of only ONE person for the whole of each district. And in every district this person is supposed to do everything – which is impossible! How can one person minister to 98 isolated villages? But with RLT’s help, which gets its money from you, the fight against leprosy will continue.

‘We have no hope of eradicating the disease – that’s not possible – but we aspire to reach a stage where all the people of the Rufiji District can understand that leprosy is just a disease and that they will then come forward willingly for help, without our having to trace them to where they are hiding.’ 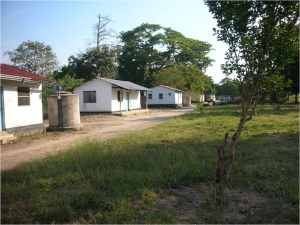 KLCCDA, the Kindwitwi Leprosy Care and Community Development Association, was formed as an independent Tanzanian company to run some elements of day-to-day life in Kindwitwi

2019 to date
In the last few years, the Tanzanian Government has brought in new conditions which affect the way Not for Profit Companies operate. It was decided that the most cos-effective option was to close the KLCCDA company and register as a Non-Governmental Organisation. This local NGO has been registered in Tanzania as the ‘Foundation for Rapid Response to TB and Leprosy’ (FRRTL). The name was chosen to reflect the close working relationship that the organisation has with the Rufiji District TB and Leprosy Co-Ordinator, Dr Rogers Nnally. The board structure of the new NGO is very similar to that of the previous board of KLCCDA. The staff who were employed by KLCCDA have been transferred over to the new NGO, whose core work and aims are very much as before.

Through the partnership between RLT and the FRRTL, your donation will continue to be used:

The Trustees are happy to answer any questions you may have about our partnership organisations change of status and can be contracted via rufijilt@gmail.com