Read the latest news from the village, written by Salum Kipoloya, our specialist shoemaker in Kindwitwi. 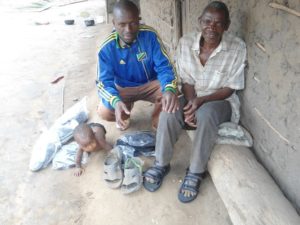 “Here in Kindwitwi we are doing well and we hope that you are also. It is already the fourth quarter so that the end for this year is very close – how time flies!

In this fourth quarter of 2017, I travelled to the villages of Mohoro, Mbwara and Nambunju.

I was able to see some of the villagers who have disabilities from having contracted leprosy in the past. Among them was Mohamed who originally came from a village called Nambunju.

When he lived there (around ten years ago now) he was treated for leprosy.

In the picture you can see his newly fitted shoes that I have adapted specifically for his feet. 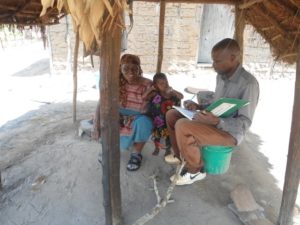 In the village of Mbwara I met with a lady called Zena as she was displaying symptoms of leprosy.

In the picture you can see me taking a record of her symptoms and ensuring she gets the right treatment.

We are able to report that only one new patient has been detected with Leprosy this quarter. The patient is a lady and has started the treatment that will last for the next 12 months.

This patient has what is known as multibacillary leprosy, which means we were able to identify more than five skin lesions.”