Dr. Sarah next to Father Lamburn’s grave in Kindwitwi. In the 1960s Father Robin Lamburn lived in Kindwitwi and through his work, helped make it the place of happiness and hope it is today.

In October 2017 I had an enjoyable, self-funded, trip to Kindwitwi Village, together with two family members. We met members of KLCCDA and beneficiaries to ensure that the funds RLT sends to Tanzania are put to the best possible use. But we also found time to enjoy the hospitality at the Guesthouse, the tranquillity and the African sunsets.

Many things have changed in Kindwitwi since the Trust was first set up in 1983 and it is important that the Trustees ensure the use of RLT funds reflects these changes. Although there are far fewer villagers with severe disabilities than there were thirty years ago, there are still fifteen villagers severely affected by leprosy, some of whom are now in their eighties and have lived in Kindwitwi since the 1950s.   At least half of these have no means of support at all, other than that from KLCCDA, so it is essential that we continue to provide funds for healthcare, accommodation, food and clothing for these most vulnerable villagers. 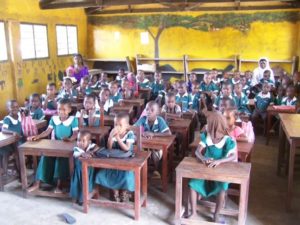 The kindergarten is thriving. It provides essential childcare for parents while they are at work in the fields so that they can provide for their children and their elderly relatives.

We visited the secondary school and met two of the five children who are currently being supported. I advised them that, should they do well enough in their exams, then RLT would support them through their A level years too.

We spoke with the District Leprosy Co-ordinator and heard how his challenge is to ensure that rural healthcare workers can recognise the signs of leprosy now that it is not as common in their communities as it once was.

Sometimes it is hard to measure the impact of so many years of support. There is less stigma surrounding leprosy and the general standard of living in the village is far better than it was thirty years ago, but for me the story of one young lady in the village encapsulates the essence of what RLT set out to do.

This young lady had just heard she had a place at Dar es Salaam University to study Electrical Engineering; her four grandparents came to the village many years ago when they found out they had leprosy, they were ostracised from society and had no hope and no aspirations. On arrival in Kindwitwi, they found support and acceptance, were able to set up homes and have a family life.

I am sure they are very proud of the achievements of their granddaughter. We wish her well in her studies.

If you would like to help give Kindwitwi’s children educational opportunities, please donate to our dedicated education fund established to support children for the next 3 years from Kindergarten through to Higher Education.

The William Powell Education Fund  has been established in honour of Bill Powell, the inspirational teacher and former CEO of IST.  Through this fund we hope to continue Bill’s legacy, ensuring talented children can pursue their dreams.

“The residents of Kindwitwi are very pleased to have their friends and supporters stay with them. Visitors not only bring an additional income into the village, but many of them also bring some important ideas and advice.”

He also says visitors also want to learn more about Kindwitwi, so they can share our story with our friends around the world.

“Dr Sarah came at the village together with her husband and her mother. During her visit we talked about the many challenges we face but also the work we are doing to make Kindwitwi a better place for us to live in.”