Leprosy has been feared and misunderstood for millennia. Some of the earliest records about the disease appear on an Egyptian papyrus document around 1550 BC although the bacteria M.leprae is thought to have been around for much longer; in 2009, a 4000-year-old human skeleton was discovered in India with erosion patterns similar to those found in European skeletons dating to the middle ages.

There are references to leprosy in the bible and it was also recognised in ancient China. Leprosy is recorded in ancient Greece when Alexander the Great came back from India and later from Rome in 62BC.

The disease spread into Europe and by 1200, there was estimated to be around 19,000 leprosy hospitals in the continent. 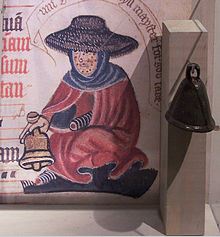 In older times, because little was understood about leprosy, it was thought to be a curse or a punishment of the gods. People living with leprosy were feared and declared unclean. They were shunned and because leprosy was believed to be hereditary, whole families could be stigmatized, not just the infected person.

In the European Middle Ages, people with leprosy had to wear special clothing and ring bells to warn healthy people to keep away. In a bid to prevent the spread of the disease, people were sent to live in a leprosy asylum or leprosarium. This practice was common throughout the world even in the 20 Century, and there are records of these forced seclusions in countries such as Hawaii and New Zealand.

Leprosy was sometimes referred to as the ‘living death’. In some cases, individuals were treated as if they’d already died; funeral services were held and relatives were even allowed to claim their inheritance!

As well as the social stigma and isolation, the medicinal treatment for these poor people in olden times was pretty unsavoury.

Some ancient texts have suggested cures by either drinking or bathing in blood, while others endorsed treatment with snake, scorpion and bee venom. Fish excreta has also been tried. One common treatment, which was used up until the late 1940s, was to inject the patient with chaulmoogra nut oil. This was very painful for the individual and although there appeared to be some benefits, and some physicians even declared people were cured, its long-term effects were questionable.

Thankfully with modern medicine and education, attitudes are changing as people realise the true nature of the infectious disease which can be cured by a specialised course of antibiotics.

The aim of World Leprosy Day is to change attitudes and increase public awareness of the fact that leprosy can now be easily prevented and cured.

Spread the word!
Be a part of our ‪#‎MyHandsandFeet‬ campaign by taking a picture of your hands and feet and sharing on social media. Don’t forget to use the hashtags #WorldLeprosyDay and #MyHandsandFeet

Your hands and feet can make a difference.