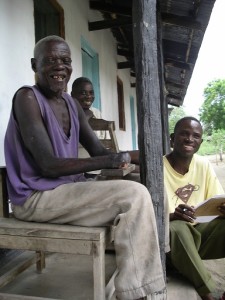 In Kindwitwi, people living with leprosy are a genuine part of the community

Today is International Day of Persons with Disabilities, and this year’s theme is ‘Inclusion matters: access and empowerment for people of all abilities’.

Even though leprosy is curable, because of the stigma associated with the disease, many people delay seeking medical treatment. If left untreated leprosy can cause permanent damage to the skin, nerves, limbs and eyes.

However, it is secondary infections that often cause the horrific disfigurements and disabilities associated with leprosy. The first sign of leprosy is a numb patch on the skin. Initially the numb patches are not a problem so people infected with leprosy continue with their daily lives, working in the fields, cooking etc. But because they are unable to feel anything in infected area, people often injure themselves through burns or cuts and then these injuries become infected.

Many of the people living in our residential service in Kindwitwi known as The Ward have severe disabilities because they delayed seeking treatment. Before coming to Kindwitwi, many were isolated or lived as outcasts from their own villages. This is not uncommon – the UN estimates one billion people living with disabilities worldwide face many barriers to inclusion in many key aspects of society.

Thankfully, people living with disabilities as a result of leprosy in Kindwitwi are not part of this figure. The Ward gives full care support, nutritious meals, and medical assistance for 20 people affected by leprosy, and each resident enjoys the privacy of their own room.

Most importantly, residents are able to socialise, work and be a genuine part of the community.