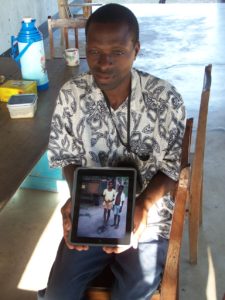 Salum, our talented shoemaker with a picture taken over 30 years ago of himself and his friend.

In the early 1980s, Dr Ian Quidgley spent around eight months in Kindwitwi, staying with Father Lamburn before starting his medical training in London. He forwarded us some great pictures of his time there, and our co-chair, Dr Feather took these with her when she recently visited.

People in Kindwitwi loved seeing the village as it was over 30 years ago, particularly some of the younger generation. Some people also found pictures of their younger selves.

Now in his late 40s, Salum Kipaloya, our talented shoemaker who also writes updates about Kindwitwi for our newsletters in his beautiful lilting style, found a picture of himself with a model car he and his friend had made. He said the picture bought back many memories of playing with his friend.

From budding mechanic to skilled shoemaker, Salum’s bespoke shoes help those with leprosy-related disabilities to be more mobile, and indeed, it can be life changing. For some, being able to walk gives them a degree of independence and self-sufficiency by being able to farm.

Salum doesn’t just make bespoke new shoes; every three months, he will check his special shoes, making repairs and adjusting them to the person’s changing needs.

People outside of Kindwitwi also benefit from Salum’s skills. He often rides his motorbike to distant villages, taking his knives and leather working tools so he can make bespoke shoes for those who are not suitable for the government-issue sandals. 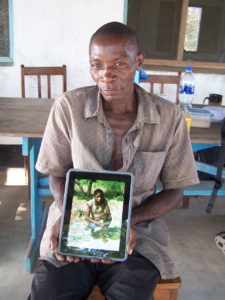 Mr Seif with a picture of his younger self taken more than 30 years ago.

Another local, Mr Seif recognised his younger self in some of the pictures. Mr Seif’s mother moved to Kindwitwi when she became affected by leprosy.

Born in Kindwiwti, Mr Seif left school at 12, and has made a living farming the fields.

Now a family man, he grows a variety of produce including corn, tomatoes, okra, beans and sesame.