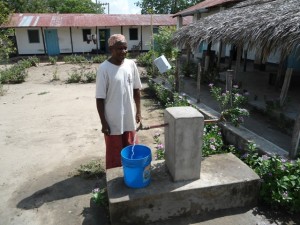 One of the taps in Kindwitwi

Organised by UN Water, the day is part of a global mission to get safer water for all.
World Water Day dates back to the 1992 United Nations Conference on Environment and Development where an international observance for water was recommended. The United Nations General Assembly responded by designating 22 March 1993 as the first World Water Day. It has been held annually since then.

Each year, UN-Water — the entity that coordinates the UN’s work on water and sanitation — sets a theme for World Water Day corresponding to a current or future challenge. This year the theme is Better water, better jobs.

You can read more by clicking here to visit its website.
For years Kindwitwi villagers had to rely on getting water from the Rufiji River. With crocodiles living in the river, this could be a dangerous exercise. However in December 2012, we were delighted to report the village had several taps, meaning villages now have easy access to running water.
Four taps have been installed with help from the Wade Foundation, one was paid for by the Government, and five are privately owned by Villagers.
One tap has been specifically designated for use by our Dispensary and residents our Ward, home to people affected by leprosy who, as a result of their previous illness, are unable to care for themselves at home.