Here you can read the reports on some of the projects we have funded.

They are in pdf format so you will need to have downloaded Adobe to read them. 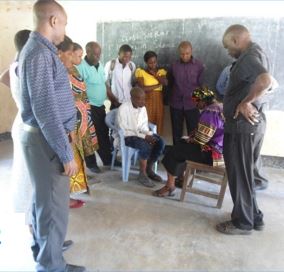 Leprosy Control Training to Health Worker: Diagnosis being demonstrated with the kind co-operation of a volunteer patient.

In this very comprehensive training session, Dr Rogers Nnally introduced care workers to leprosy, and included the epidemiology, the global situation, the situation in Tanzania and that in Rufiji district.
He stressed the leprosy notification in Rufiji had increased in the last consecutive ten years which is why the training of Health Workers on leprosy disease was so important for the community.

Other subjects covered in the intensive two-day course included the objectives of leprosy control, how to diagnose leprosy, leprosy classification, leprosy management and reporting, and care for the person living with leprosy.