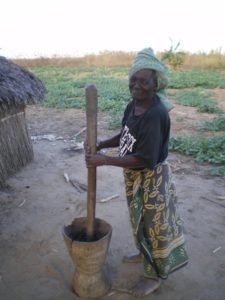 In Kindwitwi, there are many remarkable women who have overcome adversity in their lives – the stigma of leprosy has been one of them!

Over 50 years ago, Mrs Nguyu arrived at Kindwitwi having been diagnosed with leprosy. Because of her diagnosis, she’d been ostracised by her village and had to leave with her child.

She already knew about Kindwitwi as her brother had moved here a few years earlier after he was diagnosed with leprosy. Here she found a safe place, where no-one was shunned and people could live their lives.

At that time there was no cure for leprosy; it was just controlled with drugs like dapsone. However, in the 1980s, Mrs Nguyu was able to have multi drug therapy and she was finally be declared fully cured from the disease.

As well as being cured of leprosy, in Kindwitwi, she also found a new partner and had several more children. 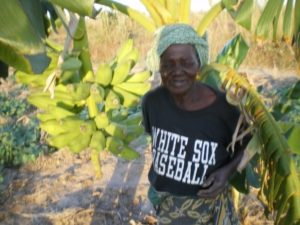 Today we celebrate women like Mrs Nguyu, who overcame the stigma of leprosy and worked hard in her fields through her life to provide for her family.

She gave them a home and encouraged them to follow their dreams. With our help, her children went to school and some even went to higher education – one of her children is our centre manager Abdallah.

Mrs Nguyu now too frail to work, and she is cared for by Abdallah and his family.

She still enjoys village life and seeing her family. 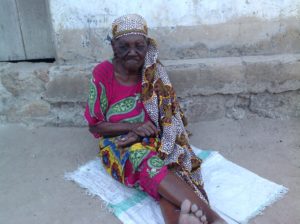 Mrs Nguyu now, relaxing in the sunshine outside the family home.