Our Care Centre manager Abdallah Nguyu does an amazing job at ensuring the centre not only runs smoothly and efficiently, but also that it is run with compassion and empathy; he himself experienced what it is like living with a family affected by leprosy. 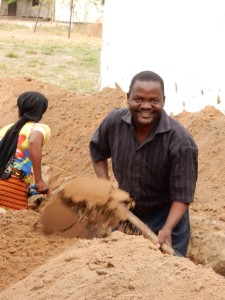 Care Centre manager Abdallah hard at work digging a trench to bring a water supply closer to the kindergarten.

In his own words, here is his story:

“I was born is 1968 here in Kindwitwi; I am a third child to my mother and second child to my father. I am the last born.

I have no leprosy so far, even though my mother and father had leprosy.

I was supported by Kindwitwi Leprosy Centre from Kindergarten, then Primary School, Secondary School and College and I am very grateful to RLT for all their support; I was among the first who benefited from the  Secondary Education Program in Kindwitwi in 1990 when evening classes were initiated at Utete Secondary School.

In 1987 I was employed by Kindwitwi Leprosy Centre as a messenger and store man, then I became office supervisor.

In 1997 I joined the Social Welfare Institute in Dar then I became a Social Worker.

In 2005  I was promoted to become the Centre Manager.

I am married and have six children.”

We are very grateful for the many hours Abdallah gives to running the Care Centre – should you ever visit, he will meet you with a very warm welcome!