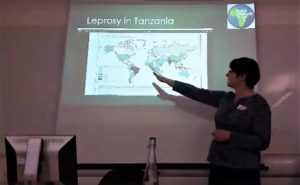 Entitled ‘Leprosy in Rural Tanzania: Detection, Treatment and Overcoming the Stigma’, Dr Sarah Feather talked about leprosy and some of the issues faced at both a global and local level.

“Although the burden of leprosy globally is carried by Indonesia, India and Brazil, the disease still has a significant prevalence across Africa. 2422 new cases were detected in Tanzania in 2105,” said Dr Feather. “Nationally this is not at a level where leprosy is formally classed as a public health problem, but there are some districts where prevalence is above the rate of 1 in 10,000 population, notably Liwale and Lindi.”

95% of people have a natural immunity to leprosy and it is not easily transmitted. It can remain in the body for up to twenty years before showing itself as a numb patch or an area of loss of skin pigment. It often goes unnoticed until the more serious complications, such as loss of sensation at the finger tips start to develop. By this time people affected are at high risk of disability as loss of feeling makes them more vulnerable to injuries which eventually leads to loss of fingers and toes.

The District TB and Leprosy co-ordinators have to ensure staff in rural dispensaries can recognise early signs of the disease; a further challenge for them is ensuring people with the disease complete their treatment, which is a six or twelve-month course of antibiotic, depending on disease severity at presentation. The Tanzanian government has invested significant resources making sure the supply of drugs to treat leprosy and complications of treatment is robust.

“There are still many myths surrounding the disease with some people still believing it is caused by witchcraft and that it is incurable. Historically villages would cast out anyone who became affected by the disease which increased the stigma attached to the disease,” she said.

“We can all help reduce the stigma associated with the disease by avoiding using the term ‘leper’ when referring to people affected by leprosy. It is an outdated term associated with stigma and being out an outcast. Modern reality is that once diagnosed with leprosy people can receive treatment in their home, be supported learn how to prevent development and progression of disabilities and continue to live and work in their community.”

Dr Feather outlined the ongoing work of The Rufiji Leprosy Trust was set up over thirty years ago to build on the work started by Father Robin Lamburn in the village of Kindwitwi.

“Currently it supports elderly villagers who are so disabled from the effects of leprosy that they are unable to care for themselves. It supports those who can work with agricultural projects and, via a kindergarten and secondary school sponsorship, ensures children from families affected by leprosy have full educational opportunities. It funds a shoemaker to provide bespoke shoes for those with foot disabilities,” she said.

Although nationally the challenge of disease detection and support of those affected by leprosy is still significant, much progress has been made in the past ten years towards elimination of the disease as public health problem.

After the presentation, attendees discussed some of the issues raised.

Once again, we are very grateful to the Britain Tanzania Society for giving us the opportunity to talk about the work we do in Kindwitwi.

Further leprosy statistics can be found on the WHO website.